This years IVCA Rally took place in Veseli nad Moravou, a small town in the south-east of Czech Republic. It was my first time at a Rally of the International Veteran Cycle Association, so i was very curious what would happen there. Sadly i couldnt be there on the first day, too much work at the office had to be finished.
We, a fellow bicycle enthusiast and me arrived at the evening of the first day, when the first tours were already finished. At least we only had to pay half of the entrance fee, which was very nice of the organisators. The evening programm was some sort of penny farthing show of the local czech penny farthing club, very nice to look at. Some traditional songs were sung by a chorus of older ladies of the town, a country band tried to entertain with 70ties hits in czech language and all participants gathered in the towns sportshall to eat, drink and chat.
To our surprise we met another austrian collector and he told us that we three are the only austrian participants at the rally. Shame on you, austrian collectors and bicycle friends, the rally was only 1,5 hours to go from Vienna!
We sat there for a while and tried to talk, but the music was so loud that you even could understand your own words, so we left the hall very early and went to sleep – in our tent, on the camp site next to the hall. The night was cold and the surface was rough, so we slept very bad.
On the next day the swap meet, some bicycle shows and an exibition of tricycles took place in the center of town. We were exited… of course you expect a lot of things going on at an international meeting like this. All the more we were very disappointed by an bicycle show with some self made bikes like you can see it on every small towns party, the total lack of nice bikes and parts on the „market“ and the tricycle exibition, which only contained childrens tricycles…
In the afternoon the races for all different bicycles took place. Here the next frustration awaited us – we couldnt participate because we had no registration, because we came one day too late… but it was nice to look at the different races. Strangely there were very less original bicycles, mostly replicas or bad restored bikes could be seen…
For our own sporting activity we used our penny farthings for a ride of 15 kilometers to a near village. This was nice, the bicycle roads are very good and the weather was ok.
In the evening a visit to some local wine cellar was on the program, but we didnt want to go there, we were more interested in veteran cycles. But we had the big luck that Zdenek Mesicek invited us to have a look at a very special and private exibition of some of the most wonderful tricycles, safety bicycles and other bikes we ever had seen! That for sure was the highlight of the week 🙂
Thanks again, Zdenek!
After another cold and rough night in the tent the great tour with all bikes and historic outfit took place. Maybe. We dont know, we left the rally, it was raining and the weather was very cold, no good requirements for 40 kilometers of riding a penny farthing.
Later on the day we visited a bicycle collector in Austria and he showed us some very beautiful bicycles so the day ended very good for us 🙂

My personal concluding remark: This IVCA 2013 rally was disappointing for me.
• The website showed a nice town. Vesesli isnt that, its a typical ex eastern bloc town with ugly 60ties and 70ties buildings.
• For me there were very less interesting bicycles
• The market was nonexistent, the show was made for the local people and especially for children.
• The evening program was boring.

And: when will organisators learn that plastic flags with numbers do not look good on historic bicycles? Take a look at Tweed Run London, they know how to make nice and fitting registration labels…

Hopefully next year its more interesting. 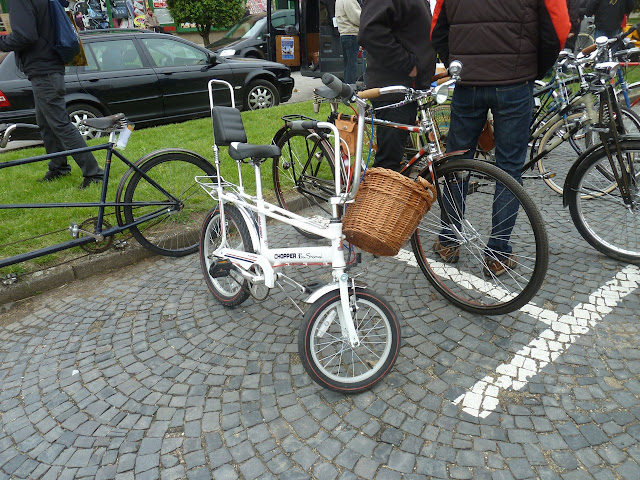 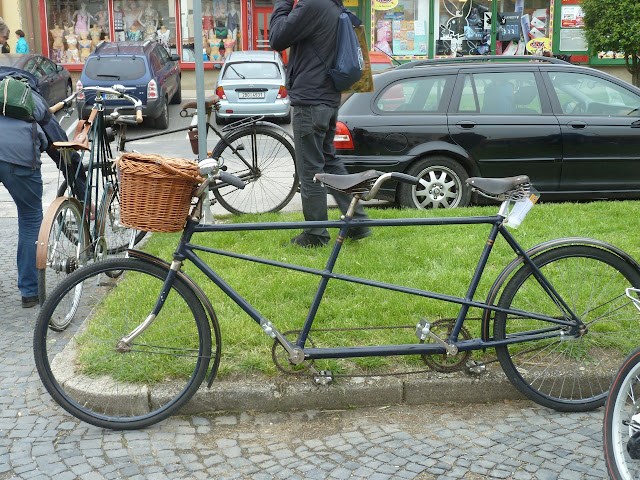 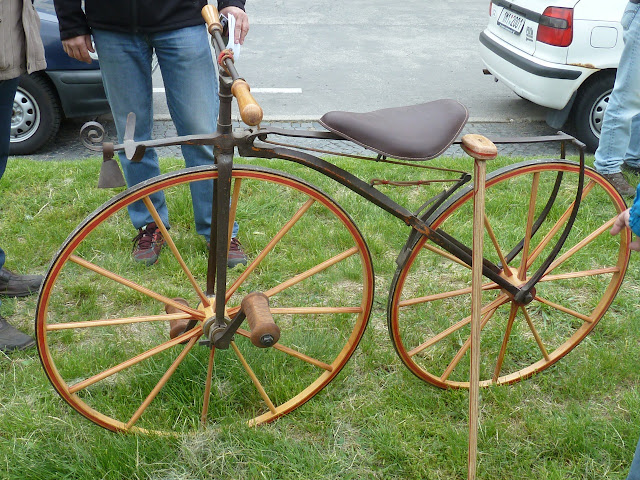 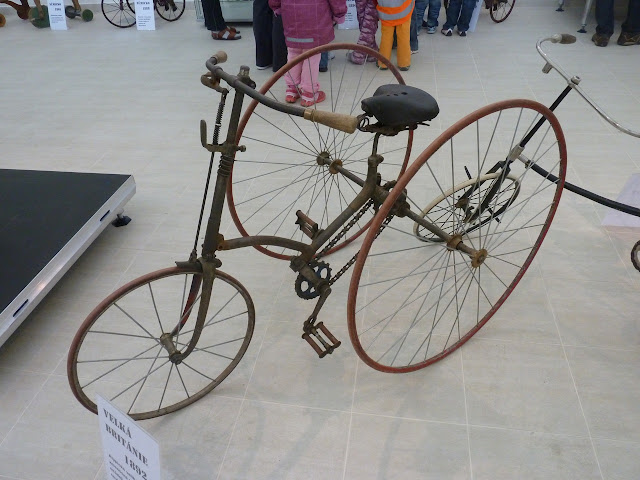 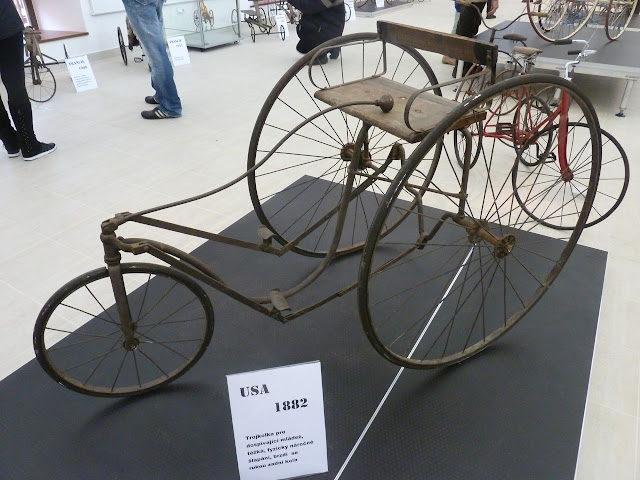 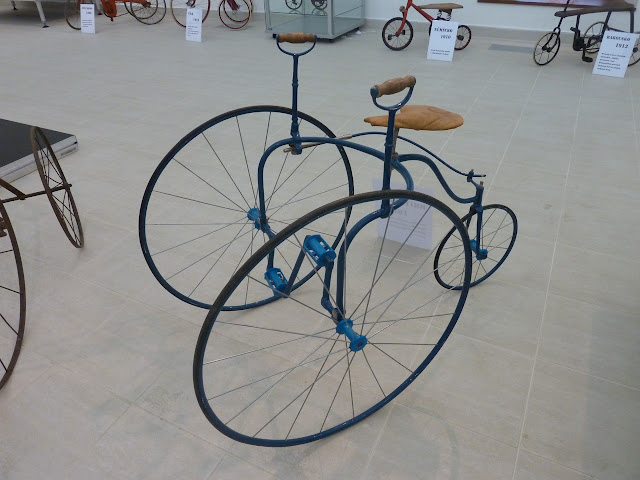 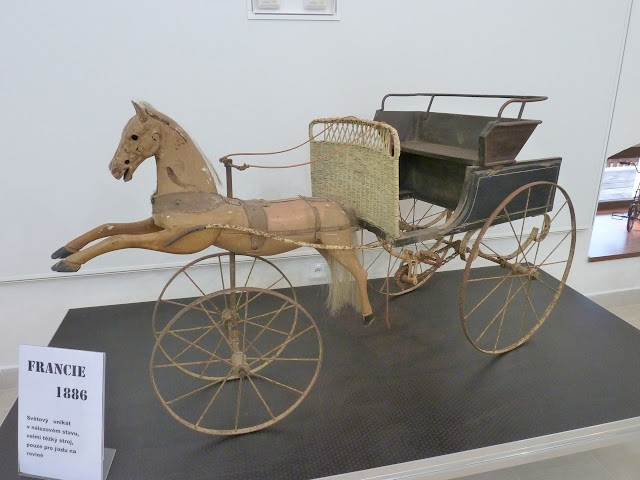 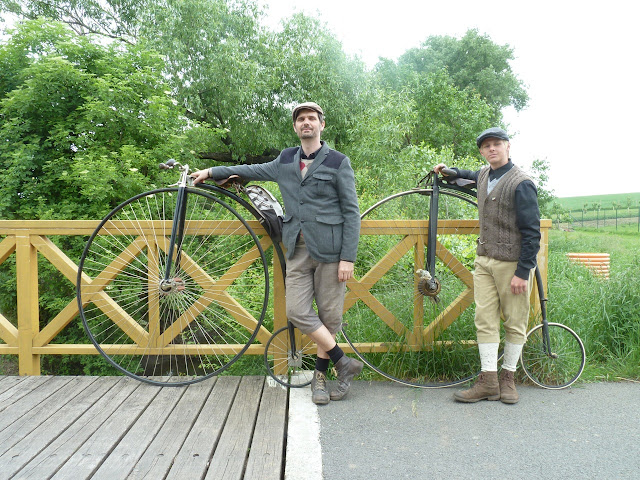 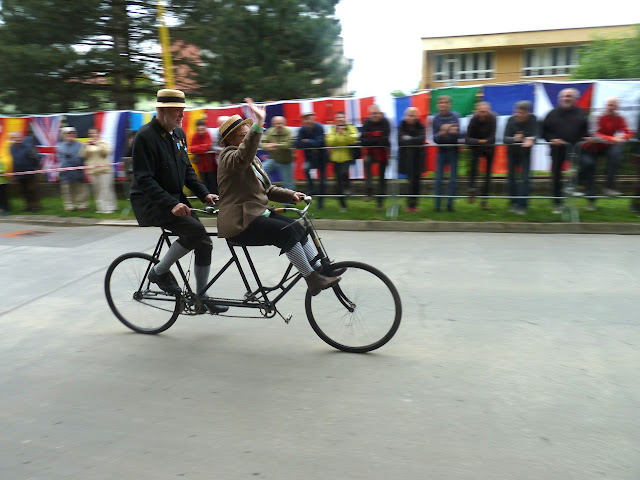 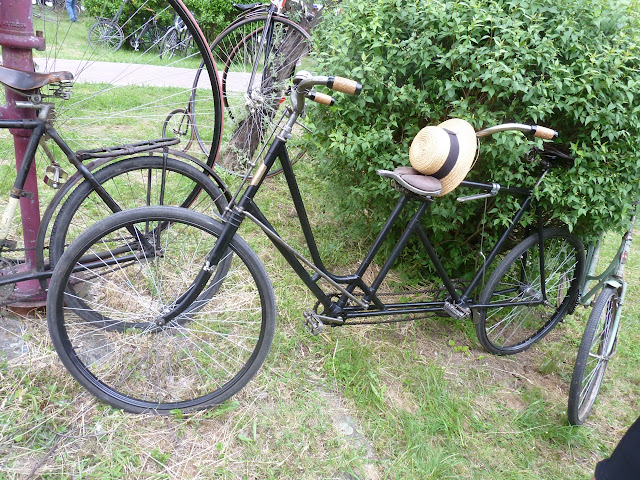 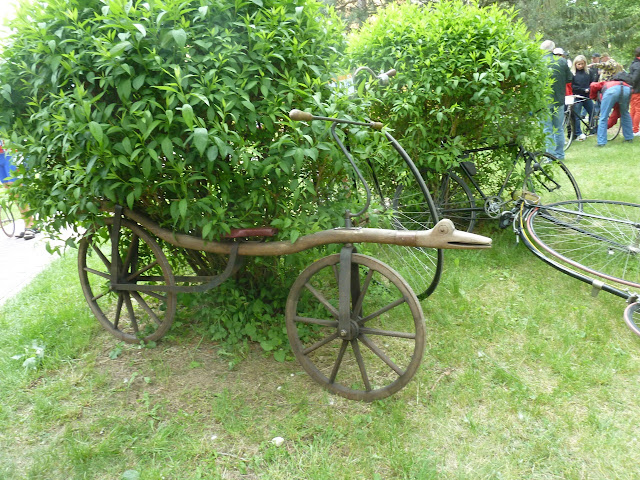 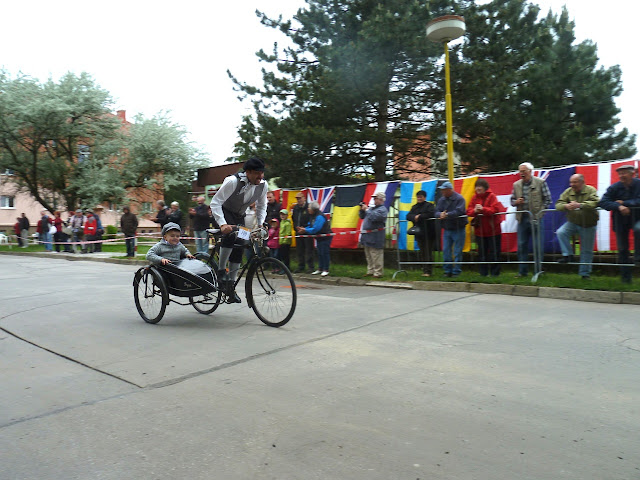 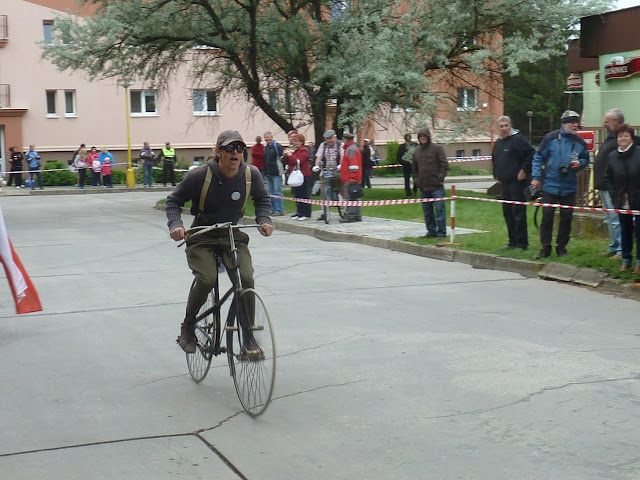 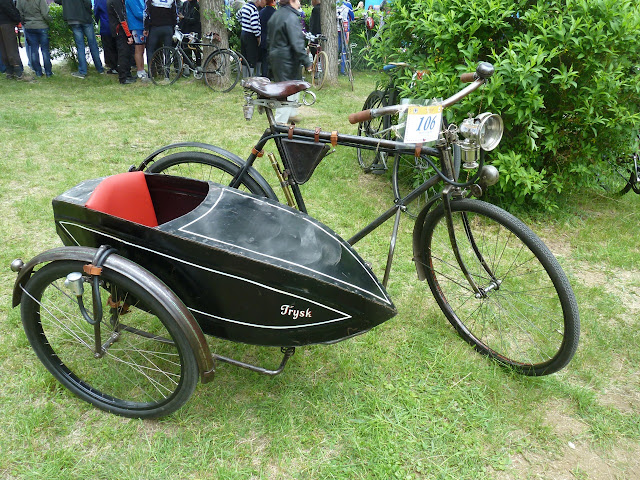 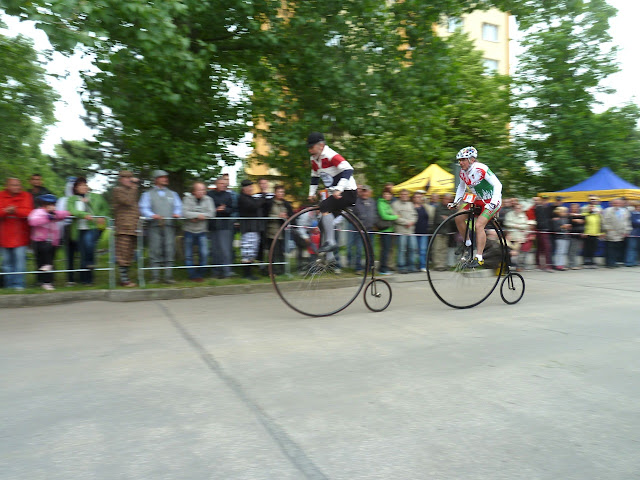 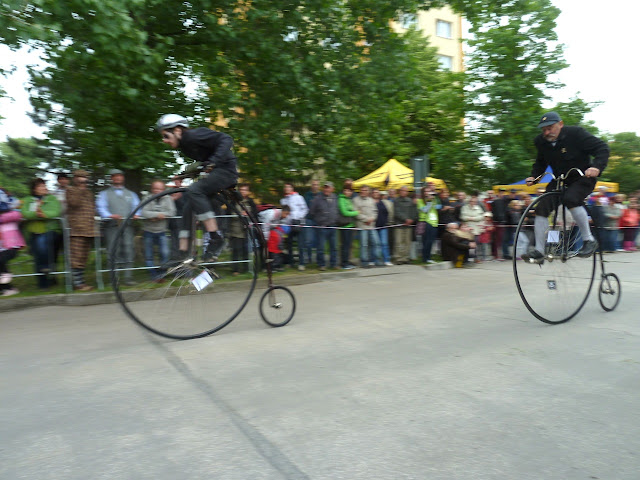 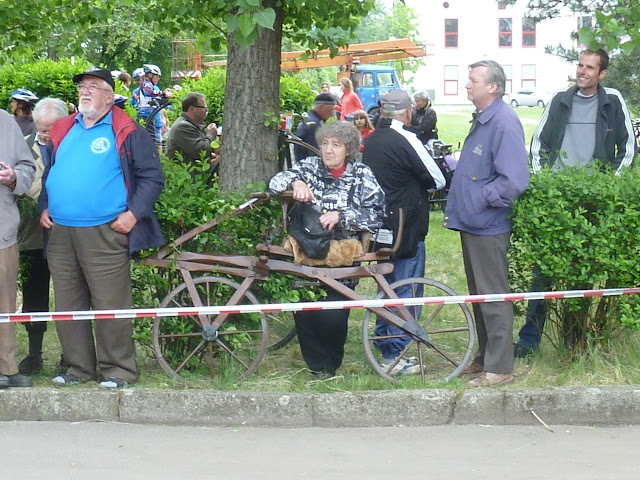 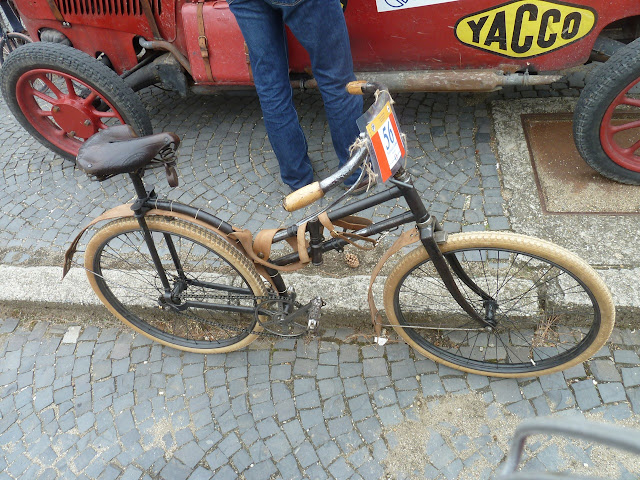